What is a PLC?

A PLC, or Programmable Logic Controller, is basically a computer that is used to automate industrial processes. It consists of circuitry that makes decisions based on 1 and 0’s (discrete) inputs and outputs (I/O), as well as analog inputs and outputs. So why not use just a regular computer? Industrial environments tend have have extreme conditions, whether that be dust, harsh chemicals, water, heat or cold. Imagine how long your home computer would last with dirt and grime all over it while getting splashed by water or chlorine?

So how do PLC’s differ from standard computers? First, PLC’s have housings that protect it from the elements. The housings are sealed so the circuitry is not exposed. The software in a PLC is also much more stable that of a standard home computer. PLC software is most commonly written in codes called ladder logic, which gets its name from how a control circuit looks with its two lines on either side and the circuit functions connecting the lines. 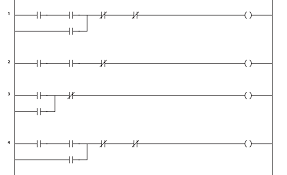 The symbolic nature of the lines define the ladder logic code – exactly how that functions is outside the scope of this article. The point is, the software written for PLC’s is much more stable than Microsoft Windows, or yes even Apple IOS (gasp). Ladder logic does not get viruses, it does not require driver updates and is intended to run continuously. These attributes are necessary considering the function of a PLC is often to control critical processes in an industrial facility.

Choose a PLC from one of the major manufacturers

When choosing a PLC, the company producing the product is a very important factor. There are a handful of PLC manufacturers that have enough resources to provide the support and continuous innovation to stay viable for many years. The major players in the United States that meet these criteria are generally considered in the industry to be:

Choosing one of these manufacturers for your application is a much safer bet than going with a smaller company for reasons explained below. Some companies opt to build their own logic controller using circuit boards and basic programming languages. Although this can be cost effective, it also leaves the company vulnerable in the case the person who wrote the code leaves from the company. In this case, making program changes or updates is difficult or impossible and the logic controller is useless and has to be replaced.

Availability of Components and Updates

The larger manufacturers listed above have distributors in key parts of the country, and even the world, whose purpose is to sell and support the manufacturer’s products. When new components are needed because of a defect or an expansion, finding the component is easy and the cost is less because there are options on where to purchase. Another reason to choose a major manufacturer is that they come out with updates to meet current trends and communication protocols. Competition drives innovation, and large PLC manufacturers are continuously innovating to try and get an edge on the competition. Although updating to the newest hardware and software is not usually a requirement, it can be a benefit if the update is significant. The access to components can also be a safety issue when it involves automated processes intended to protect people. Waiting days or even hours to resume a safety process because a part is not available is not acceptable to most companies.

When it comes to technical products, support is critical. Schneider Electric has automation distributors, such as ATI Electrical Supply in Las Vegas, in nearly every major city. Rockwell Automation has a policy of only one distributor per region, but that distributor is required to have technical support people in house. When a customer has a problem, needs training or wants to expand their process, having an automation distributor in close proximity saves time and money. Customers that choose smaller manufacturers without local distribution can find it very frustrating to get product support. This is not a situation you want to find yourself in when your controller malfunctions and a major batching process shuts down!

Automation processes can be critical to the profitability and safety of companies. Programmable Logic Controllers are often a main component for companies to run efficiently, so choosing the right manufacture is a very important decision. I’ve often heard process managers say “no one ever got fired for choosing the largest PLC manufacturer in the world”.

Added to your cart: