How to Avoid Developing a Product or Service that Fails

As a contractor or end-point service company, you may not build a ton of products, but you probably create new processes all the time. I was fascinated to learn that the MVP (minimum viable product) concept applies not only to making products, but to creating processes. Let’s take a closer look at this concept.

According to a recent study by SSC Associates, the typical failure rate for new services or products offered by companies is approximately 40 percent.* 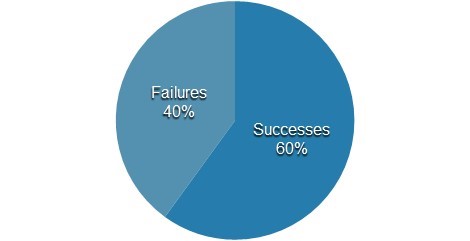 *Many articles report figures as high as 80 to 90 percent. The SSC study reviewed many research reports and proved that in reality, between a third and a half of all new products fail.

This rate includes both products that are cancelled in development and those taken off the market after release. Products or service offerings that fail after release can cost a company a lot more than those killed because issues are uncovered during the development process.

The following lists the costs associated with each:

According to information published in The Harvard Business Review, the most common reasons for products or services failing after release tie to a single issue: a lack of research.

Product or service developers fail to do things like:

History is chock-full of new product failures that can be tracked back to a lack of consumer knowledge, insights and research. See how many of these you remember:

I recently spoke to Brandon, who runs a company that leases out electronic equipment to nightclubs and other music and entertainment venues. He had a big idea for a lighting system that would automatically respond to a band’s music without a person running it. He believed it would cut lighting costs for smaller bands and venues while still providing a high-end lighting experience.

Brandon spent a significant amount of time and money designing, building and launching his product. Within a few weeks of product release, he found that most bands were uncomfortable with it. They thought it was distracting compared to the typical lighting systems run by people that they were used to. Over time, he found no one was interested in leasing his innovative system and all the time and money he spent on it were completely wasted.

Today, Brandon admits that it would have made sense to test his idea with some bands and nightclubs during the development process. It would have given him a chance to cut his losses sooner or change the product so the bands would have been more comfortable with it.

Why do so many products and services get released without testing?

Because many developers believe they can only begin testing when they have a completely finished product prototype or service offering. And once they’re at that point in the development process, they have so much invested that they just push ahead and release it to the public without testing.

The concept of minimum viable product lets you test a product throughout the whole product development process. That’s because you don’t need a finished product or prototype to do so. The same concept can be applied to a service offering.

A minimum viable product (MVP) is one that has been developed with enough features to test it with consumers, gather insights on it and and make decisions about its continued development. You simply take your product to the level needed to be able to test it with consumers at different points in the development process in a wide range of research channels. And if you’re creating a service, you only develop the offering to the point where you can test it.

Depending on the type of research you’re doing, and where you are in the development cycle, you could test your product using a:

There are two clear benefits to the minimum viable product approach:

There are countless ways you can test an electronic product. And these ideas can be applied to service offerings, as well. They include:

A disciplined approach to testing

You may — and probably should — use all these testing options as part of your product development process. The same is true for new services. Here’s what a sound testing plan could look like (you’ll want to develop a custom plan designed aligned with the development of your electronic product): 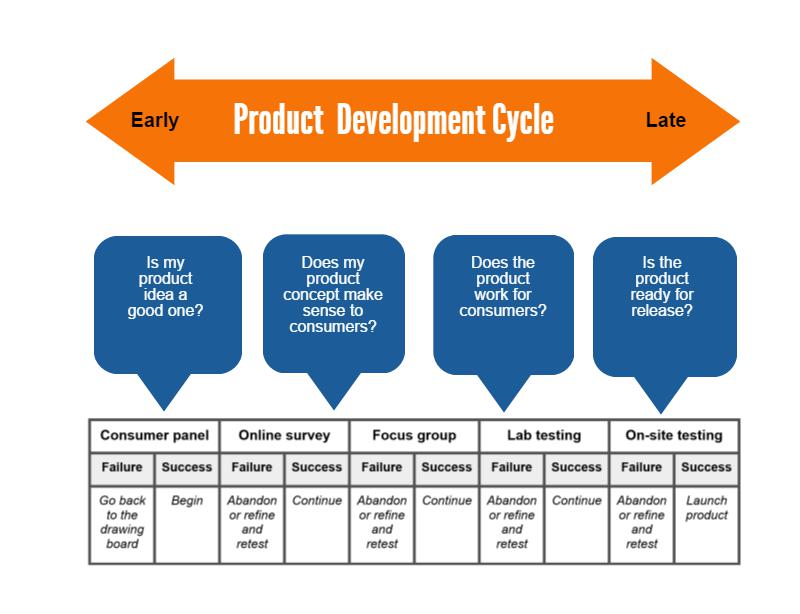 How testing can pay off

A benchmarking study by The Product Development Institute (PDI) and APQI reveals that organizations that take a more disciplined, research-based approach to product or service development have greater success and lower failure rates when they release them to consumers.

This chart shows that the top performing development companies have a 62 percent success rate in new launches. Their middle-performing competitors have an almost 50/50 rate and undisciplined bottom performers have just under half their offerings succeed.

Looking at this in another way, top-performing companies that do more research are more likely to kill or cancel concepts in development, limiting the dollars they waste on things that won’t make it in the marketplace. And in the end, a research-based approach limits the number of products or services that they release to consumers that fail to just 14 percent.

Note: There is one other important reason why you want to avoid releasing products or services to consumers that they don’t like. It could tarnish the image of your company and prevent them from trying out other things you recommend. It can be almost impossible to regain consumer trust once it’s broken.

Brandon, the guy who had the lighting-system product failure, admits that he has implemented a testing plan for the development of his next electronic invention: an inexpensive, high quality sound system for smaller concert venues.

He plans to use the minimum viable product approach because this will be a costly product to develop and he doesn’t want to waste money on another dud. He plans to start by testing concepts and plans in the early part of the research cycle, moving to a limited-feature prototype in later research, then an actual, full-feature product prior to release. He even has money set aside to sponsor a night at a club so he can try it out in a full venue.

Like Brandon, testing should be an integral part of your electronic product or service development process. The minimum viable product approach could be the solution you need to keep your research costs low while still getting the consumer insights you need. It can be a great way to avoid failures that could cost you a lot financially, and to your company’s reputation.

Added to your cart: